“The Book Project: How I became involved and what I’ve gained” by Ness Vlajkovic 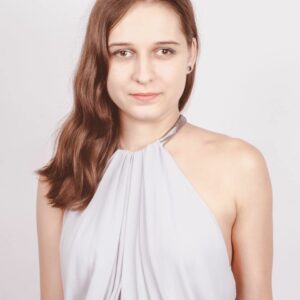 Late in 2017, I received an email from a Deafblind Consultant at Senses Australia in Perth. She had forwarded me information about some mysterious new book project. It grabbed my interest, and I proceeded to get involved.

I am a third-year journalism student at Edith Cowan University, so as you might imagine, I am a keen writer. This project has been a wonderful adventure so far, and it’s not over yet. I’m so excited for the upcoming months as we will hopefully be publishing our book then!

I’ve faced a number of challenges by choosing to participate in this project, but I have also met some incredible people along the way who have been patient, encouraging and understanding to the max. I could not have asked for a better team of people to work with – we all have a common goal that we’re striving towards, and so it’s great to share that little secret thrill of soon having our stories out in public.

I have mainly struggled with motivation and time management. It’s really difficult to get inspired sometimes, and it’s also impossible to cover every single aspect of my life just in one chapter. I had to keep reminding myself that as a writer, I would benefit by taking this small first step and needed to see it through. I wanted my story out there.

So after much procrastination and a number of health-related issues preventing me from writing, I finally sat down and typed it all out. I tried not to be too critical of my writing, but I needed to edit it a few times before I felt satisfied. It was a huge relief to finish it, but I still felt like I could have done better. I suppose it is up to the readers to form their views now. I can only hope for a positive response.

Since I was 13 I’ve been attempting to formulate some version or other of my life on paper. I’d start my autobiography but then get distracted and put it aside. I realised that at the rate things were going, the bio would need constant updating of the latest events in my life. And that was tricky, so I just left it.

I have written for my uni magazine and for a couple of other publications but not so much about personal matters as my chapter in this book project.

This project has given me the opportunity to step outside my comfort zone and put my emotions out there for the world to read. Previously, I’d been very careful to cover any negativity in my private life, but this book project has prompted me to dig deep and share the stuff that’s been buried under layers of protective ice.

An unexpected bonus has been the Focus on Ability Film Festival which has allowed me and several other writers to promote the selling of our book visually and audibly by creating an engaging documentary that could potentially win us some money and good exposure.

A major highlight of the project for me has been that all of us, the writers and even the project directors, are in the same boat – we all have a disability and as such everyone was very respectful of each others’ differences. In other words, there was no pressure or general unease among us – it was a very self-paced and stress-free experience.

I am honestly so pumped to have this book published and to read all of the other members’ amazing life stories. Bring it on!